The Microsoft Store is the official retail business of computer and technology mega-corporation Microsoft. It sells all of Microsoft's in-house products and provides a comprehensive range of support for customers.

There are over 113 Microsoft stores across the world (mostly in the United States) and an online store can be found at MicrosoftStore.com. The physical retail outlets allow customers to play on their Xbox games consoles.

Despite being a household name Microsoft didn't actually have its own retail store until 1999 when they opened an outlet in the Metreon in San Francisco, California. This was closed in 2001.

The concept was re-launched with greater success in 2009 when they opened a Microsoft Store from within their Redmond, Washington headquarters. This was the start of a broader plan, which saw stores open across the country starting with Scottsdale, Arizona, and Mission Viejo, California. Today there are 103 stores in the US, 9 in Canada, and 1 in Helsinki, Finland. There are plans to open stores in regions all across the world, with one opening in Sydney, Australia in 2015.

Technically the online store has been around longer than the retail outlets, but was previously branded as the Windows Marketplace. It allows you to make savings by using Microsoft Store coupons. We list all the latest coupon codes here at Coupofy, simply click one of the offers to be taken to the site where it can be redeemed.

The Microsoft Store covers the company's wide range of computer products, hardware and software, and also digital downloads for software and apps.

Devices include the Surface "laplet" series, their range of PCs and Tablets, the Xbox One and Xbox 360, Lumia Phones, the Microsoft Band (smart health band), and all sorts of associated hardware and accessories.Under Software & Apps you can purchase the range of Windows operating systems, the Office suite of software, Apps for Windows, Windows Phone & Xbox, and games for Windows and Xbox.The site also has sections specifically for Business and Student customers. Certain promo codes can only be redeemed by certain customers, such as the Microsoft Store student discount.

If you are unsure of what to order or need help you can connect immediately to a live chat support expert.

The Microsoft Store accepts Visa, MasterCard, American Express, Discover, and Paypal, for payment methods. To redeem a Microsoft Store coupon code simply enter it in to the promo box during checkout.

MicrosoftStore.com serves over 200 countries across the world, redirecting users to the local site depending on their geographic location. This includes Canada, Australia, most of Europe (France, Germany, Spain, the Netherlands, the UK) and India, Italy, Japan, South Korea. European countries that are not directly catered to can still get orders shipped by using another European website. This is easier in countries that both use the Euro currency.

The majority of regions are given free standard shipping which takes between 3 to 5 business days. In some instances there are options to pay for a faster service. MicrosoftStore.com also has an extensive support section covering orders, device support, software & apps, and much more.

Returns of unused and undamaged items are accepted within 30 days, excluding any personalized items, giftcards and sale items. You can initiate a return from within your online account. You will then be given a returns label to print and apply to your package.

Certain countries will have different returns policies depending on local laws.

Obviously if you used a Microsoft Store coupon you will only be refunded the actual amount charged to your card. 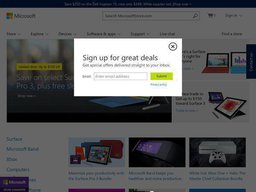 One Microsoft Way
98052 Redmond, Washington
US

Get notified when new discount codes arrive from Microsoft Store