Sports Authority is a private retail corporation that was founded in 1928 as Gart Sports. It is headquartered in Englewood Colorado and has over 450 stores, making it one of America's largest sporting goods chains. You can also shop online at SportsAuthority.com where you can make savings by redeeming a Sports Authority coupon from our list. Coupofy lists codes for all the latest Sports Authority deals.

The company is owned by Leonard Green & Partners. It was way back in 1928 when Nathan Gart, then a newspaper carrier for the Denver Post started this company with only $50 in fishing rods and other fishing equipment. Decades later the company now known as Gart Sports opened their Sportscastle store, a super store in Denver, Colorado. The store was then located at the corner of Broadway and 10th Avenue. Via a series of acquisitions, the company exploded in growth in the 1980s.  The companies acquired included Hagan's Sports Ltd. and Stevens Brown, and then in 1992 Leonard Green & Partners became the largest share owner in the Thrifty chain. The momentum didn't stop there. In 1998, Gart Sports then merged with Sportmart that had been started by the Hochberg and Cantor families in Niles, Illinois, which brought them 60 more stores in around 9 states. In 2001 Gart Sports merged with the Oshman's Sporting Goods chain, which was started in Houston, Texas in 1919. It's founder, Jake Oshman built the company to become the largest of sporting goods chain in Texas, with around 40 plus Oshman's SuperSports USA stores and 15 others.

It was on August 4, 2003 that Gart Sports and The Sports Authority, Inc. merged in to one chain.  At that time, The sports Authority ruled as the largest of mega sporting goods chain in the US. They had accumulated about 205 stores in 33 states.  Now based in Englewood, Colorado, the business operates solely under The Sports Authority brand name.

In addition to the merger, in 2006 the company acquired Copeland's Sports that was in Chapter 11 bankruptcy.  Finally, in 2006, the Leonard Green & Partners, the private equity firm purchased The Sports Authority in a leveraged buyout.  This coast a whopping $1.4 billion and took the company back to private status.

Sports Authority sells a variety of brand name sports related items as well as their own private labels.

To make savings on any of these products simple copy one of our Sports Authority coupon codes in to the box during checkout on the site. You can also print a Sports Authority in-store coupon if you prefer to shop at one of their traditional outlets.

Sports Authority accepts all major credit cards, including Visa, Mastercard, Discover, and American Express, and their own branded gift cards. You can also pay with Paypal.

Sports Authority's shipping procedures are listed on their website. Depending on the items and location you're in, there are certain procedures and restrictions, however standard shipping will usually arrive in the 48 contiguous states within 3 to 6 business days. Second Day and Next Day options are also available.

From time to time they will run a free shipping deal, which you can redeem with an appropriate Sports Authority coupon.

Sports Authority's Return Policy states that both in store and online purchases can be returned or exchanged within a 30 day grace period. Before doing so it is important to check over the full terms on the website and seek authorization by calling customer support on 1-888-801-9164. You will then be permitted to use a prepaid returns label.

The company can also be contacted using an online email form. 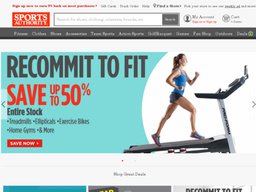 Get notified when new discount codes arrive from Sports Authority