WWE Shop is the official online fan store for professional wrestling company World Wrestling Entertainment, which stocks a wide range of apparel, toys, wrestling DVDs and other merchandise. While some of its trademarks are licensed out to retail chains like WalMart and fans can also buy items live at the arenas, Shop.WWE.com is where most of their retail business takes place. Here you can make savings on your purchases by using one of our WWE Shop coupons, which we keep updated with all the latest codes when they become available.

WWE is the largest and most successful pro wrestling company in the world and these merchandise sales are a key factor in its multi-million dollar yearly revenue. WWE is currently traded on the New York Stock Exchange with the majority of shares owned by CEO Vince McMahon, his daughter Stephanie McMahon and other family members and close associates. The business has its roots in the 1950s Capitol Wrestling Corporation, founded by Vince's grandfather Jess, and passed on to Vince Sr. only a few years later, who would brand the show the World Wide Wrestling Federation (WWWF). In the 50, 60s and 70s the promotion only ran events in the North East area, but when Vince Jr. took the helm in the 80s he began a national expansion that included shows across the country and overseas, multiple TV programs, and live Pay Per View matches.

By the late 90s the now shortened WWF was one of the most watched programs on cable TV, and with that came record merchandise sales which remain strong today. WWE Shop was originally branded WWF Shop Zone when it went online in 1998, but in 2002 it was re-branded along with the entire company when they became WWE.

WWE Shop handles both domestic and international orders, though there is also a separate website tailored specifically to the UK and Europe at EuroShop.WWE.com.

Their DVDs and Blu-rays include documentaries profiling individual wrestlers and their matches, and individual events that have already aired on PPV like WrestleMania.

You can also buy gift cards and subscriptions to their online streaming service the WWE Network.

Most products from the above categories are eligible for WWE Shop coupons, which you can apply during the checkout process by pasting the code in to the promo box.

WWE Shop supports all major credit cards, gift cards and Paypal for orders. If you do not wish to order online you can also phone 1-866-993-7467 with you payment and order information on hand.

WWE Shop determine your shipping options after you've entered a delivery address during the checkout process. They ship worldwide.

In the US they often run promotions that allow you to get free shipping if you spend over a certain amount. This can be redeemed with a WWE Shop free shipping coupon.

Send returns to WWEShop.com Returns, 6380 Port Road Groveport, OH 43125. You are advised to include the original packing slip, marking returned items with a pen on the slip. 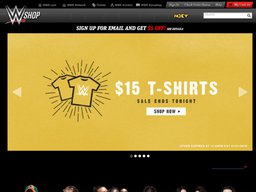 Get notified when new discount codes arrive from WWE Shop