Roku is a brand of online streaming devices originally developed to receive the Netflix service, but which now also supports a comprehensive range of online content apps. Its selection of boxes and HDMI sticks are connected to consumers' televisions or monitors, and are able to use their existing wireless and wired internet connections to stream from content providers. Roku does not offer its own content, rather users must install third party apps, many of which require some form of paid subscription. Popular apps include Netflix, the WWE wrestling Network, HBO Go, Hulu Plus, and many others.

The Roku Inc. corporation was founded in 2002 by Anthony Wood, and is headquartered in Saratoga, California. In the beginning Roku developed music players and audio products. It wasn't until 2008 that the Roku 1 set-top box was released, which put the company on the map. Today they boast having over one million active viewers. There are three different types of players that you can purchase from Roku. The first is the Roku Streaming Stick, which comes with most of the main features. It’s compatible with your TV, has well over a thousand channels that you can use, and will even let you know when new movies are being released via the Roku Feed. This is much smaller and more practical than the boxes, but does not have all the features.

The next player you can purchase is Roku 2, the second generation streaming box that was first released in 2011. This has all the benefits and features of the streaming stick; however, there are added advantages. This player is slightly more expensive than the first, but it means that you get a lightning-fast processor and a Micro-SD card slot and Ethernet and USB cables. With all the players, you can send photographs and videos to your television from your smartphone – this is all done through the Roku app.

Finally, Roku 3 is for those who don’t want to miss out on any of the features which are available from Roku. The headphone jack is great if you want to listen privately without any disturbances. Perhaps you don’t want to disturb anyone else, so putting your headphones in and watching your favourite movies makes for a great night in.

You’ll also get motion control for games with the Roku 3 player, so if you’re an avid gamer, this might just be the perfect gadget for you. It was released in 2013.

Roku itself no longer sells the original device, but it can still be found at some third party retailers.

Roku.com acts as an intermediary between information about its products, and its licensed retailers. Depending on your geographic location you may therefore be taken to different online stores, including Amazon or the Media Streaming Market. All retailers of Roku will accept standard credit cards for payment.

If you product is defective you may be able to return it directly to Roku itself under its warranty exchange program. First you must contact customer support to receive a Return Material Authorization (RMA), which must be done so within 30 days to qualify for a refund, exchange, or credit. The required forms can be found on Roku.com. 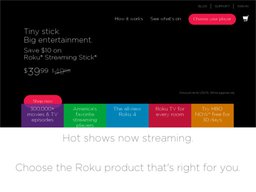 Get notified when new discount codes arrive from Roku