Best Cities in America for Pizza

Best Cities in America for Pizza

The history of the first original American pizza dates back to 1943 when Chicagoan Ike Sewell introduced deep-dish pizza to the Windy City. Pizzeria Uno offered pies worthy of oversized appetites, with a thin crust lining a cake pan filled with many layers of cheese, meats, veggies, and sauce.

Shortly after that, the development of gas-fired pizza ovens made pizza entrepreneurship easier and more affordable, resulting in mom-and-pop pizza shops springing up around the U.S. There are now probably more kinds of pizza in America than in Italy.

The next major change in American pizza history was the advent delivery focused chains. Major chains and independent pizzerias have served billions of slices around the world since the 1960s. Different cities across the country have been offering tasty pizzas to fulfill the unending demand of this popular food.

In honor of National Pizza party day, we decided to list the top 7 cities in America with the best pizza. 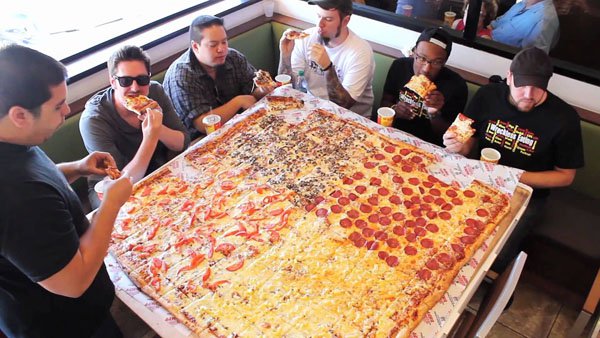 New York offers both traditional and modern pizza lovers something to sink their teeth into. Pizza is a loved delicacy here. In most of the restaurants in this city, you will find different varieties of pizza. One of Neapolitan's variations includes the New York style pizza, which is bigger and flatter than the original pizza of Napoli. The famous New Haven-style pizza is a white pizza with clams and Philadelphia style pizzas can be classic Neapolitan or a variation with a slightly sweet taste.

For quite some time now, the Neapolitan pizza pie has pervaded the air of New York City. In spite of the modest size of this pizza which is subjected to average temperature during cooking, it has not ceased to be a delight of many people who have a high affinity for pizzas in the New York area.

The Lombardi pizza place cannot be left out of the history of pizza parlors in New York. As a matter of fact, one of its peculiarities is the use of the popular coal oven. New Yorkers have a sense of tradition and pizzas made in coal ovens usually have a more distinctive taste. Some of the other most popular pizza spots in New York include Artichoke and Joe's Pizza located in Greenwich Village and East Village respectively.

Chicago is well known for its charming restaurants which are one of the city’s major sources of tourist attraction. One of the most famous dishes served here is the Chicago style deep dish pizza which is a reversed version of the traditional pizza which consists of a crust, cheese filling then sauce on top.

Americans love their food and know how to gourmet it, and in Chicago, you’ll find everything from mussels, squid, red peppers and capers on pizza. Most parlors take it an extra mile and serve their pizzas with a selection of thin crusty bread and generous portions. Some of the most popular spots for gourmet pizza in Chicago include Pizza Capri in Hyde park, which serves a wide selection of gourmet pizza and Homeslice in Webster avenue.

Most major chefs realized the potential of Vegas and opened pizza joints in the area. Only in Vegas can one enjoy a world class meal at 3 AM at spots like Shibuya and N9NE Steakhouse. In this city, people tend to have more refined tastes and you’ll find everything from of anchovies and chicken to exotic meats like crayfish, oysters and even dandelions on pizza. Truffle oil is also often used in many pizza parlors before it is baked.

For the old school meat eaters, salami is often used as a topping along with parmesan cheese in many Las Vegas pizza parlors. It is also not uncommon to find pizza parlors offering pizzas with more refined ingredients like taleggio, pecorino and goat cheese. If you happen to be a New Yorker and you're feeling homesick, why don’t you try Grimaldi's Pizzeria on Las Vegas boulevard? They offer a wide selection of Brooklyn-style pizzas that will please even the most discriminative of pallets.

It's hard to find somebody who does not enjoy a great slice of pizza in San Francisco. In fact, more people consider pizza to be their favorite food than perhaps any other type of food that is out there. When you consider all of the options that are available, it’s not hard to understand.

In the San Francisco and Berkeley area, you can find great pizza on every corner. Some people like their crust to be thin and others thick, and San Francisco has something for every kind of pizza lover. The most popular type of pizza in the region seems to be Neapolitan with a variety of other styles peppered throughout the city.

Una Pizza Napoletana is an institution in the city and has been serving some of the city’s most iconic traditional pizza for decades. One of the particularities of the restaurant is that it is open only 4 days a week and the decor and menu are very minimalistic, however, critics agree that it serves one of the finest Neapolitan style pizzas in the Bay Area.

When it comes to culture, New Orleans has nearly every other American City beat. The food is no exception. And it doesn’t stop at pizza, you’ll find everything from fine pasta served with local delicacies like catfish and gumbo to calzones filled with the most delicious cured meats Louisiana has to offer.

Since New Orleans follows a tradition of rich pizza toppings, it is not uncommon to find oregano, prosciutto, and mushrooms on pizza. Pizza Margherita is also served in a Tangier manner and garnished with sausage and spicy salami.

Apart from Mozzarella, ricotta is also one of the cheeses used in New Orleans pizza. Don Tellico offers a facelifted version of pizza with cherry tomatoes, basil, anchovies and scamorza cheese as toppings.

America offers a smorgasbord of pizzas for all tastes and budgets. So on this National Pizza party day, we suggest you visit one of these famous destinations and enjoy the culinary trip of a lifetime. Worry not, if you don't have time to go on a trip to get these pizzas, we have our best pizza deal as emergency. Head over to our pizza coupon for Old Chicago, Marco's Pizza, Happy Joe's, or Beggars Pizza