You’ve seen their photos in your Facebook feed, and met them at your favorite bar in town – it’s true, travelers are turning out in greater numbers than ever before. It’s hard to believe that even 100 years ago tourism and the travel industry scarcely existed, limited those who were well-to-do or within a country’s borders. But as technology has advanced and made communication and transportation easier and easier, people have begun leaving their comfort zones for new territory both physically and economically. 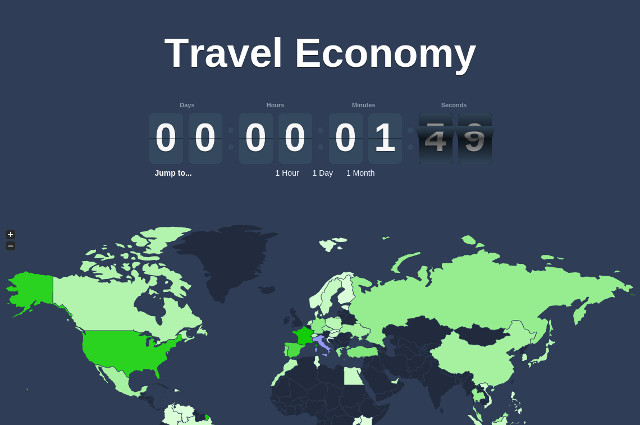 The travel bug seems to be biting everyone, and this infographic helps illustrate the real-time (projected) impact it has on our global economy. With the top 50 most-visited countries highlighted, you can hover over a country to get an estimate of how many estimated foreign visitors are arriving per second, hour, day, month, or year, and how much money they’re spending. Throw a few interesting facts in there (like the fact that the most expensive hotel in the world is located in Switzerland), and you’ve got a killer infographic that will help your blog or website prove its point.

Companies have been doing business overseas for decades, but it’s only in recent years that it’s simplified enough for both big companies and individuals alike. Thanks to the advent of computers and the Internet, it’s more commonplace than ever for companies and corporations to reach across borders for trade deals and expansion, and even for you average professional to strike up something international.

Relaxed trade barriers and visa policies have helped ease the flow of business and travel worldwide - more than 8.6 million passengers and $17.5 billion worth of goods are transported by planes every day, and that’s just the tip of the iceberg when it comes to the tourism industry’s impact on the global economy. It’s more than the regular suit-and-ties who are heading out to a rendezvous– families and young adults are getting bit by the travel bug, too.

A shift in our societal approach to travel has also encouraged many to go abroad and explore what other people, places, and cultures have to offer. Let’s face it- travel is fun! In many countries, young people are turning out in droves to globetrot while they’re still free of “serious” adult responsibilities like kids, a mortgage payment, or repaying student loans. Instead of heading directly to University after high school or settling down after college, many in their 20s are choosing to teach abroad, do year-long trips, or immerse themselves in another culture for several months. Many of are choosing countries where they can live fairly well on a tight budget – places like Thailand or Vietnam, where their dollars will go further, and this usually boosts the economy/quality of life for many native residents.

While many young adults save up their cash so they can head out on an unforgettable trip, there’s also a budding industry for “digital nomads” – those who make a living off their online businesses or skills while traveling and living abroad. Nowadays there are tons of websites dedicated to helping digital nomads survive and thrive while on the road, and loads of freelancers can find work simply by hopping on the Internet. Communal workplaces for digital nomads and other online professionals have also been popping up all over, making it easy to live and work overseas.

With digital nomads’ numbers growing, many professionals completing business overseas, and more families and young people hitting the road, you can see how the travel industry continues to explode. Tourism contributes to nearly 10 percent of the global GDP and has a projected growth of 3.9 percent annually. There’s an incredible economic ripple effect from the travel industry – many “emerging” governments are basing trade economic policies and around tourism (which is evident in places like SE Asia and parts of Africa), and even the countries you’d least expect (like North Korea!) are welcoming the tourism boom with open arms.